In the heart of the Tuscany, close to the Cerbaie’s Hills, in a tiny area, it’s possible to find Drosera rotundifolia L. var. corsica Maire, a carnivorous plant unique in the world. The “sphagnum-bog” of the little San Martino’s valley (Fucecchio – FI) is, probably the exclusive site where is possible to find this particular species that, differently from the typical shape of Drosera rotundifolia (as well existent there), has carnivorous leafy bract leaves on the inflorescences. The “sphagnum-bog” is large 1,000 sq. mtrs and additionally has some esteem species, like the Osmund, (Osmunda regalis L.) and, until few years ago, the nice Gentian (Gentiana pneumonanthe L.), probably extinct due to phytosanitary measures and for many fires in this zone. 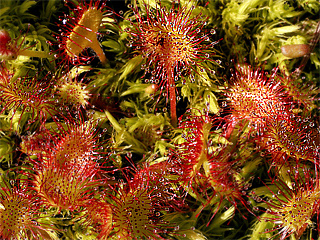 AIPC, in close cooperation with the probate authorities and the landlord, is working in order to promoting the preservation project (began in 2005) for this very important natural biotope, participating in the activities structures, management and info campaign, aimed at the Drosera’s survival; this plants, indeed, is currently at very high risk of extinction because of the site peculiarity and the lack of effective protection from the danger elements (infesting plants, shading, indiscriminate plants-collection, etc.).

The project includes the re-establishment of the original habitat, limiting the competition of other infesting plants (such as the Ulex europaeus, Erica arborea, Pteridium aquilinum, Rubus sp., etc.). and cutting several trees (Alnus glutinosa, Frangola alnus). This way, the most important species like Sphagnum sp. and Drosera sp. are able to receive more sunlight for growing up. The area will be fenced and several footbridges will be built as well as some guide-boards will help even the less expert excursionist to understand the peculiar area. The Author of the script about the Drosera rotundifolia var. corsica “Rugiada del Sole” (“Sun’s Dew”) is considering to write the second book in order to update the situation of the area, and to describe the activity and the studies completed. This project interacts perfect with the printing of the book, giving its support for its diffusion through presentations and sight-seeing of the area. 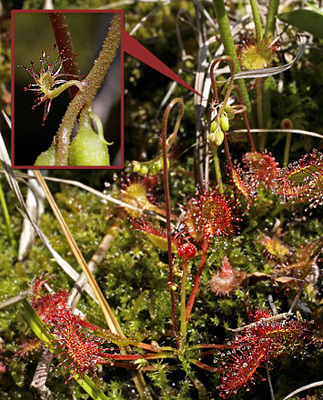 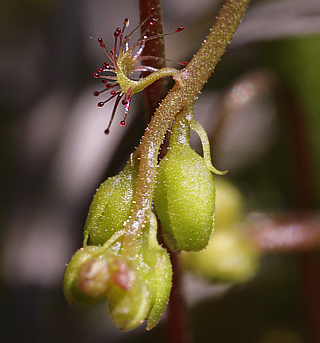 Jointly the Ecocerbaie Association (www.ecocerbaie.it), with the supervision of the Italian Corps of Forest:

● First of all, cleaning and lopping the most infesting plants in the area (2008, December).
● Afterward planting approximately 50-60 timber 10 cm. diameter (provided by the Empoli’s Corps of Forest ) in order to completely delimit the area.
● Affix 5 forex guide-boards that inform about the peculiarity of the area and the action performed by the different contributors.
● After this basic, initial intervention, will be built several footbridges, around 80 mt. (it’s still under consideration between a static or a floating solution, to be determined after the delimitation of the area).

In the future may be undertaken some further actions:

1. Re-introduce again the sphagnum in the re-opened area.
2. To spread Drosera’s seeds inside the area.

In order to achieve this goal, AIPC begin an awareness campaign for fund-raising in order to buy the wood required for the footbridges and the boards.

Until now two management campaigns were made, involving many days when weeds were cut and the area was cleared.

The “Cerbaie’s project” and its relative fund-raising allowed the set-up of safe nature trails consisting of the definition of the boundary of the area with pales and a handrail cable and four gangways which allow to advance inside the “sphagnum-bog” into some interesting, but not sensitive, points. Until now € 2.040,00 were spent. 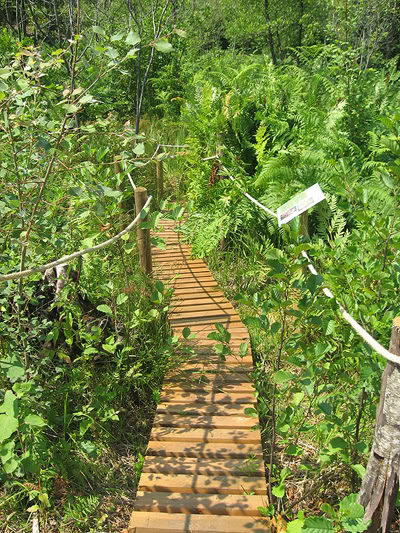 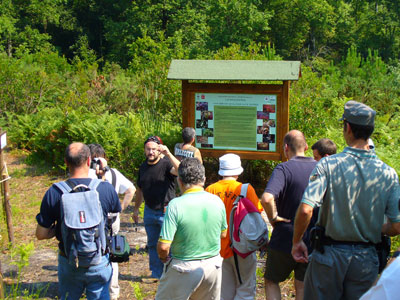 This great operations culminated on 2 July 2010 (after a postponement due to bad weather) when the area was officially inaugurated, in the presence of the local institutions (Municipality and State Forestry). Nowadays, we can tell how the carried out actions have increased the sphagnum area and the expansion of the small Drosera spots. At the present time the number of individuals is calculated in some hundreds. 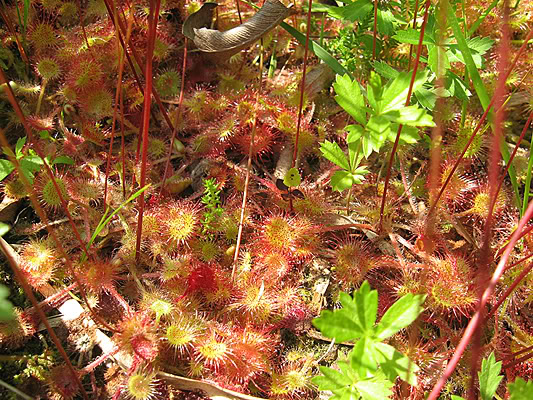 In the immediate future the area will be managed through a constant work of active monitoring consisting in the surveillance of the area and in the periodical removal of vegetation in excess that annually threatens the sphagnum-bog.
The wooden structures will be integrated with the realization of a passage crossing the deeply embanked water course, followed by the laying of the handrail and with the potential enlargement of the area to other sphagnum growing points nearby the main area.
Drosera’s seeds will be collected and grown also in the Cerbaie’s Botanical Garden and in the Padule (i.e. bog) of Bientina, a few kilometres from Sammartina where actions of protection and diffusion of the germplasm of rare or valuable local species are starting.
Meanwhile, some inspections in some close areas where there are other plants of Drosera in serious difficulty have started; we will soon let you know about their conclusions and projects.

With the purpose of realizing and maintaining that, AIPC carries on the awareness and fund-raising campaign

Many of this proposals could be nice Christmas’ gifts that will give an important contribution to the project, or just a way to contribute to inform and to know the frailty of this ecosystem.